Ray Smith completed his Bachelor of Science (Hons 1) in geology and geophysics in 1963 and his PhD in geology and geochemistry in 1967, both from the University of Sydney. He then became a Postdoctoral Fellow at the University of Manitoba, Winnipeg, Canada. From 1968 to 1969, he was appointed to the Faculty of the State University of New York at Binghamton as Research Associate. From 1970 to 1973, he was Research Manager, then Exploration Manager for Union Miniere Development and Mining Ltd in Western Australia.

Ray’s research has covered a range of geological and geochemical approaches to mineral exploration in Australia’s deeply weathered terrains. He is internationally recognised as one of Australia’s leading exploration geochemists and regolith geoscientists. Part of his research and that of the teams he has led focused on laterite geochemistry for use in detecting concealed mineral deposits through the use of trace-element geochemistry and microscopic preserved textures.

Broader research, involving collaboration across regolith groups in CSIRO, particularly with Charles Butt and Ravi Anand, focused on establishing concepts in regolith-landform mapping, regolith stratigraphy and landscape evolution as a basis to understanding exploration geochemistry for locating mineral deposits. The scope of these groups broadened considerably through formation of the CRC LEME-1 in 1995 and the CRC LEME-2 in 2000, which established a dynamic network of researchers and postgraduate students across Australia, as well as active international links.

Commencing in 1980, through trial mineral exploration programs supported by industry, he established procedures for geochemical mapping in lateritic terrains, carrying out the first geochemical mapping program for the Yilgarn Craton of WA from 1980 to 1987. Concurrent with this initiative, he became Australasian Coordinator for the International Geochemical Mapping Project IGCP 259, of UNESCO. From 1987 to 1992, he was a member of the international Steering Group for this project. He and his teams extended the coverage in the Yilgarn region through 1997 to 2000. Further extensions of this work have resulted from collaboration between the Geological Survey of WA and CSIRO from 2006 onwards.

Ray Smith has led undergraduate, postgraduate and professional development courses and workshops, frequently with associated field trips, in Australia, the Americas, Africa and Europe. He has published extensively through books, reports and in scientific journals.

Collectively, the research his colleagues and he have carried out has changed the way mining companies go about their exploration in Australia’s deeply weathered terrains and in comparable terrains elsewhere in the world.

Prior to joining CSIRO, Ray conducted research into the alteration of basaltic volcanics due to rising temperatures and pressures in response to burial. He continued this research at CSIRO establishing the burial metamorphic framework for the Hamersley Basin of Western Australia.

Upon formal retirement in 2004, he was appointed an Emeritus CSIRO Fellow continuing his research, on a voluntary basis, into recognising clues to concealed ore deposits.

He has served on the National Council of the Australian Academy of Technological Sciences and Engineering (ATSE) 2005-06, as Chairman of the ATSE’s Western Australian Division 2005-06 and is a member of the ATSE’s National Assembly 2008-10.

He was an editor of the international journal Applied Geochemistry from 1986 to 1995.

Ray Smith was elected a Fellow of the Australian Academy of Technological Sciences and Engineering in 1997 and has received a number of honours and awards for his research or for research of the teams he has led including: 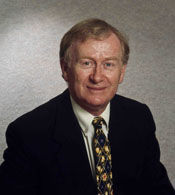