In the Terry Holden collection, there is a document entitled “Notes on Programming the 3447-405 and 3649-405 Card Reader.pdf”.  This was written by George Karoly of CDA, and dated 5th December 1964.  I contacted Professor David Karoly.

Thanks for your email. My father is still alive, 95 years old, and living in a residential care home in Brighton Beach.
He started on computers at the University of New South Wales, in electrical engineering in 1955, then joined Control Data in 1963, spent 6 months in California in Mountain View with CDC in 1964, returned to work in Canberra still with Control Data, and then moved to Melbourne for Control Data at the end of 1966, where he stayed for many years in several different positions.
Best wishes,  David
On 29/1/20, 14:50, “Peter Hanlon” <hanlonpp@bigpond.net.au> wrote:
Rob,
I went to Godfrey Lance’s funeral in Bermagui last week. There was a sprinkling of DCR people there.

The new rates from 1st July 1968 caused consternation amongst the Research staff who managed the accounting processes as a sideline. Until that time there was an integer relationship between CPU seconds and the billing rate, and this departure caused some fundamental change.

The disc in question (CDC813) consisted of 2 stacks of 18 platters about 600mm in diameter. 64 of the platter surfaces were used for storage totalling 100 million 6-bit characters. Every weekend it was buffed and polished by CDC engineering staff in readiness for the next week. The disc occupied a box about 1800L X 900W X1700H with a separate box of electronics.

The disc control statements (DRCOPDF etc) were prompted by a source/action/destination mentality, with DFDEL having a particular air of finality.

After reviewing some of chapter 3:

The references to W. Cumpston and P Buscombe might be a trifle overstated. Both were vac students, the former working for Jack Palmer and the latter Geoff Shearing. Geoff came via Manchester Uni, and it is not surprising that he might give a little talk on the differences.

It would be nice to work in a few user references on novel uses of the facilities.

Mr A (Tony) Bomford of the Commonwealth Division of National Mapping made very innovative forays into early mapping of the continent.

The reference to rewriting Plot and Text was a major effort and a short-term necessity. The plotters were using disproportionate amounts of storage for spooling, resulting in frequent ‘drum overflows’. RH Hudson and I invented a packing algorithm which resulted in an average 16 times reduction in file size.

The Facom stuff was actually a golden era, and deserves a lot more press.

I also enquired who was the person shown on the cover of the DCR Annual report for 1968-69.

On 3/2/20, 13:17, “Peter Hanlon” <hanlonpp@bigpond.net.au> wrote:
I think that it looks more like the Education Officer John Drabble rather than Henry.
Henry incidentally had a heart attack and died at work.
On 3 Feb 2020, at 1:27 pm, Bell, Robert (IM&T, Clayton) <Robert.Bell@csiro.au> wrote:
I remember John Drabble, and I don’t think it is he.  It could be a CDA staff member.
Incidentally, I’ve been in touch with David Karoly (now at CSIRO Aspendale), who told me his Father George is living in Brighton Vic – George worked for CDA and was one of the co-writers of DAD I believe.
Yes, I heard about Henry’s passing at work.
John Morrissey (ex-Csironet) has just retired from CSIRO – he has a couple of modules from the Cyber 76 processor – pictures are in my artefacts section.
Thanks
Rob.

Yes I remember George Karoly too. Control Data did most of the early work on the ‘Displays’ aspect, including Dave and Mabel. Ian Wadham, Mark Westcott were involved too. Brian Austin is best to ask about any of these details. The CIDER editor was largely CDA, and was in the vein of IBM TSO
It still looks like John Drabble to me. Jan Lee might be better at processing faces from 50-years ago.
The Cyber 205 was delivered on Anzac Day 1984. I had a ute, and got a great heap of the packing plywood because of the holiday and my official reception status. It was decommissioned at $600/tonne scrap in 1989 or thereabouts. I was still using the plywood years later.

The start of the on-line network

I asked Peter Hanlon:
Peter,
One unanswered question is whether the Csironet network existing before DARPANET!
In the 1967-1968 Annual Report, one of the teleprinters is reported to have been set up at the Division of Land Research.
I’ve asked a general CSIRO enquiries line whether that would have been at Black Mountain or elsewhere, but you might know please?
Rob.
On 3/2/20, 16:30, “Peter Hanlon” <hanlonpp@bigpond.net.au> wrote:
Hi Rob,
There was a teletype (ASR33 probably) set up at the Division of Land Research on the Black Mountain campus which ran by cable along the Botanic Gardens fence into a DEC PDP8 thence into the CDC3600.
It operated for several weeks or months until lightning intervened, frying parts in the PDP8 before damaging the CDC3600.
Control Data generously fixed the machine out of spares, rumoured to be $80K-120K. DCR then considered optical isolators.
Peter

This allowed jobs submitted remotely to be processed in Canberra on the CDC 3600.  I wrote to Peter Hanlon:

I have a question about job stack, which copied card decks to tape at branches for air-freight to Canberra.
Do you know or remember whether job printout was printed in Canberra, or were the output files copied to tape and air-freighted back to the branches for printing: or maybe both?
Thanks
Rob.
On 11/3/20, 12:55, “Peter Hanlon” <hanlonpp@bigpond.net.au> wrote:
Pretty much printed in Canberra and air-freighted back. The tapes (1200ft reels rather than full 2400ft) arrived early evening, were processed in the 2nd and 3rd operations shifts, and left Canberra on the early planes.
I found a listing of the first process which backed up the 813 discs each weekend and restored them. Internally these processes were named DISCLOSE/DISCOPEN, and I wrote them. Later, Henry Hudson rewrote the close process as a ‘physical’ rather than ‘logical’ copy for improved speed/reliability, producing dual magnetic tapes at full writing speed. I then rewrote the restore process, and scored each tape record pair for sequence/software checksum/hardware parity, giving a 0 (all good) to 31(something not kosher) response. We were amazed at the number of unlikely error situations that arose. (Tape A record seemingly good but checksum error, tape B parity error but the preferred copy etc)
Jan was at Sydney branch during the job stacking process and might have better feel.
From: jan-lee@grapevine.com.au [mailto:jan-lee@grapevine.com.au]
Sent: Friday, March 13, 2020 6:21 AM
To: ‘Bell, Robert (IM&T, Clayton)’; Brian Savvas
Cc: ‘Peter Hanlon’
Subject: RE: Job stack
Hi Rob,
Peter knows more about it than I do. I’m sure he’s right through – the printouts were flown back to the branches from Canberra. We didn’t mount tapes and print them locally. We wouldn’t have had capacity to do that.
Tapes were included in the jobstack to Canberra but my memory is that these contained  the programs to be run and any data necessary for input to the programs. I don’t think we shipped card decks to Canberra.
We must have copied cards to the tapes every day. It’s a long time ago so perhaps I’m imagining how it must have worked rather than remembering how it did work.
Joan Hayhurst was also there so I can ask her – I will be seeing her on Saturday.
Hi Brian,
Do you remember how the jobstack worked?
Cheers,
Jan
On 13/3/20, 13:49 , “Brian Savvas” <brian.savvas@bigpond.com> wrote:
I started with DCR in January 1967. That month, the University of Adelaide installed a CDC6600 [6400 – ed.]. Although the CSIRO’s CDC3200 was in the Engineering building, it no longer had university users. CSIRO users were small in number so the Adelaide 3200 could cope with the load. Hence, off-loading to Canberra was not required. We used the jobstack primarily for correspondence.
Hope that helps.
Brian Savvas

In March 2020, I asked the former staff members how the job stack process worked, which allowed jobs to be submitted in Adelaide, Melbourne and Sydney, and run on the 3600 in Canberra.  Jan Lee had lunch with Joan Hayhurst on 14th March, and reported:

Hi Rob,
Today I asked Joan Hayhurst about Jobstack Sydney – Canberra.
Her memory is the same a Peter’s and mine.
Card decks were loaded to tape in the afternoon is Sydney, the tapes were collected by courier and taken to Mascot airport to be flown to Canberra. I think the pickup from DCR Sydney was at about 4.00pm.
The jobs on the tapes were run overnight in Canberra and the output was  flown back to Sydney in the morning. Output was in the form of paper listings which were included in the returning jobstack cases together with the tapes to be used for the next Sydney to Canberra  run.
The courier delivered them to the Sydney Branch of DCR which was located at National Measurement labs at Sydney University where the operators (or whoever was on deck) separated the listings into individual job outputs which were placed in the collection boxes for the various Sydney CSIRO Divisions.
The CSIRO Divisions used to send card decks to the Sydney Branch and retrieve the listing output using a daily courier run similar to the daily Sydney-Canberra jobstack run but the only tapes involved were tapes containing data. Code was always on cards.
Cheers,
Jan
I tried to visualise the process with the following picture (which contains some anachronisms): 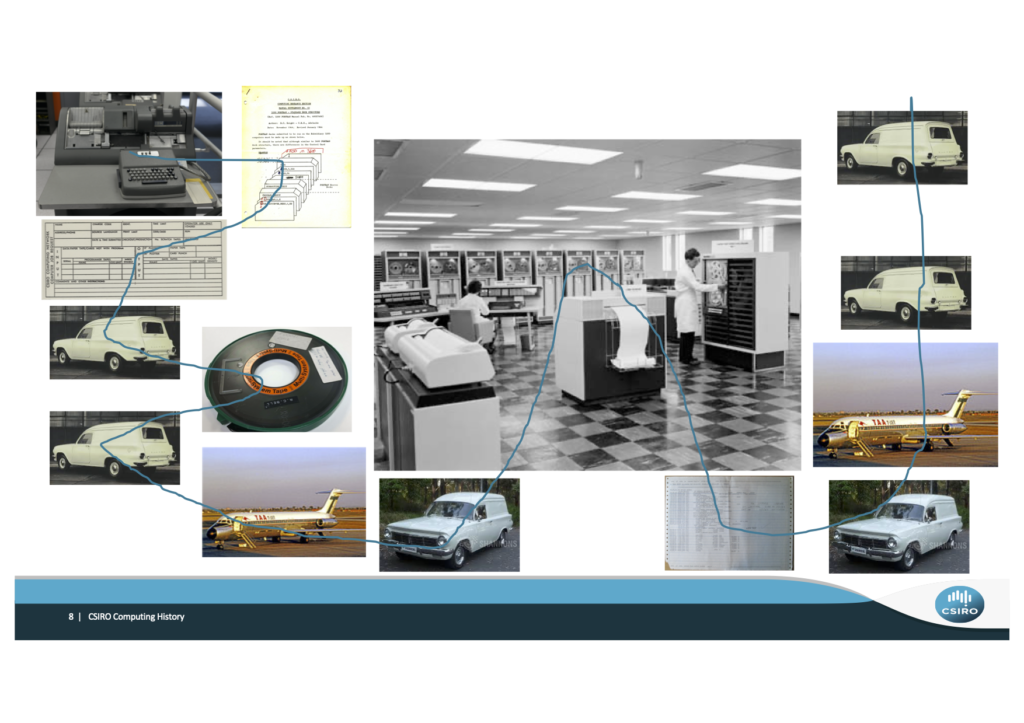 Back to contents  —  next chapter