CSIRO’s research into space science had its beginnings around 1944 in the Division of Radiophysics which had been established in 1939 following a secret Cabinet meeting of the Australian Federal Government, of which no records were kept. The meeting approved the setting up of a radar research establishment to aid the World War 2 effort. It was given the cover designation of the CSIR Radiophysics Laboratory. The CSIR Radiophysics Laboratory was granted divisional status in May 1940. Once the war ended the division turned its attention to two main areas: radio astronomy and cloud physics. From 1946 to 1954 scientists and engineers from the CSIRO Division of Radiophysics built a range of radio telescopes at Dover Heights. This then led on to the development of the Parkes telescope, completed in 1961, and the Australian Telescope Compact Array (ATCA) opened in 1988.

The original CSIRO Office of Space Science and Applications (COSSA) was established in 1984 and was part of the Institute of Information and Communication Technologies. The CSIRO Earth Observation Centre (EOC) was established within COSSA in 1995. The EOC structure within COSSA had the nature of a Program in a Division. COSSA and the EOC shared the same Head and had complementary missions in their areas of common interest in space activities and national and international liaison. COSSA ceased operations in 1996 while the activities of EOC concluded in 2003/2004.

The Australian Telescope National Facility was created as a separate Division in January 1989 and operated as such until 1 December 2009, when the ATNF became part of a new Division, CSIRO Astronomy and Space Science (CASS).

In December 2009, the new Division, CSIRO Astronomy and Space Science (CASS), was formed which brought together CSIRO’s radio astronomy capabilities (the Australia Telescope National Facility), NASA Operations (including the Canberra Deep Space Communication Complex), CSIRO Space Sciences and Technology; and the CSIRO Boeing Advisor. NASA Operations had had a very diverse history within CSIRO, having been part of a number of Divisions over the years. In July 2014, in a major restructuring of CSIRO when most Divisions were renamed Flagships,  CSIRO Astronomy and Space Science did not become a Flagship but  remained an independent business unit in the broader grouping of National Facilities and Collections. 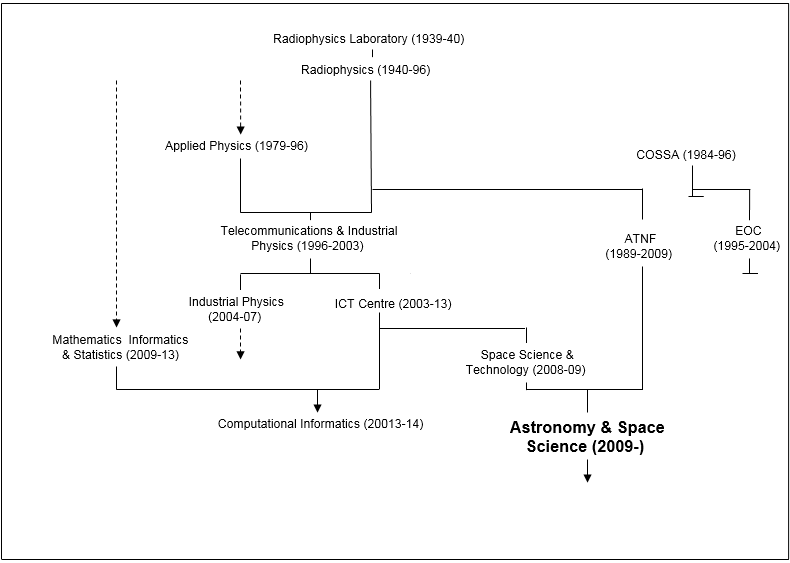