When John Wright became the Chief of CSIRO Energy Technology in 1994, he was committed to lift the profile of energy research and development in Australia. As part of his vision, he took the bold action to re-locate the headquarters of the Division from its sixty year-old laboratories in Sydney into a purpose-built new facility in Newcastle that demonstrates the future of energy. This required considerable negotiation and persuasion to assemble the substantial funding support required for the design and construction of one of the most energy efficient facilities of its type in the world.

The CSIRO Energy Centre is now an icon for cutting edge energy technology and a showplace for CSIRO’s commitment to Australia’s energy future. It has attracted a new generation of young energy scientists and has spawned an array of alternative energy initiatives. The Energy Centre offers a pleasant working environment from its maximum use of natural lighting and ventilation. It distils a sense of pride from staff and a real feel of ownership.

For his role in transforming CSIRO’s energy research John Wright was awarded the CSIRO Lifetime Achievement Award in 2008. Staff from the Division have been members of teams that won major awards for developments such as: the UltraBattery®; high power supercapacitors; low emission vehicles and the commercial development of underground coal gasification.

The early days and the development of HIsmelt

Wright has worked in several CSIRO Divisions starting out in Mineral Chemistry (1973), then Fossil Fuels (1976), Process Technology (1978) and in the mid 1980s, Mineral and Process Engineering. His work in Mineral and Process Engineering was initially on a new iron making process. He was the leader of the CSIRO team that developed the HIsmelt direct iron ore smelting process supported by the then Conzinc Riotinto Corporation (now Rio Tinto). This high intensity process involved the injection of fine coal and iron ore into a turbulent molten iron bath at temperatures up to 1 500 ºC. Of the many competing direct smelting processes being developed around the world at the time, HIsmelt is the only one that has proceeded to a commercial stage with the first installation in Kwinana, Perth. He became the leader of the Division’s smelting section and then the Assistant Chief in recognition of the range of fundamental and operating mineral smelting advances developed by his team.

A change of direction

In the mid 1990s Wright was becoming increasingly concerned with the environmental aspects of mineral processing, particularly greenhouse gas emissions from the processing industry and the resultant climate change implications. When the position of Chief of Coal and Energy Technology became vacant, Wright needed little encouragement to apply as he could see that this could be an ideal platform to pursue his growing interest in energy and related environmental aspects. He was subsequently appointed in 1994 and immediately made a commitment to lift the profile of energy research in CSIRO from what he perceived was a low level at the time, and largely fossil-fuel based. Whilst continuing research on mitigating the environmental impact of the use of coal as an energy source, he removed ‘coal’ from the title of the Division to emphasise that this was to be only one aspect of the Division’s activities, and introduced programs on alternative energy systems, such as cutting-edge battery development, biomass conversion, alternative transport fuels, distributed energy, energy efficiency and demand side management. This in some ways was a research culture shock to some of the staff (but welcomed by most, nonetheless). But more was to come.

Signs and symbols are important

Wright was dissatisfied with the physical state of the sixty year old Division. It was not an appropriate platform from which to launch a new vision for energy research in CSIRO. The new vision needed to encompass the full spectrum of energy developments to include solar, wind, increased energy storage, emissions-free fossil fuel utilisation and particularly, advanced energy efficiency and energy systems integration. To be fully effective, a new facility that was custom-designed to be a showcase for these energy technologies of the future was required.

Through his contacts, Wright made it known that he was looking to move the Sydney part of the Division of Energy Technology to more suitable premises to expand and showcase the new energy vision. Through considerable discussion, negotiation and the necessary fund raising, a Greenfield site in Newcastle, NSW was chosen as the Division’s future headquarters. Wright, accompanied by one of Australia’s leading ‘green building’ architects plus the head of CSIRO’s building section at the time, undertook a world tour of the most energy efficient buildings in the world and developed a design brief for the new office/laboratory complex. The building was designed over a period of almost three years – a story in itself! The $38 million facility was completed in 2003 and staff moved in to the new premises from that time, building up to a full compliment over the following two years. 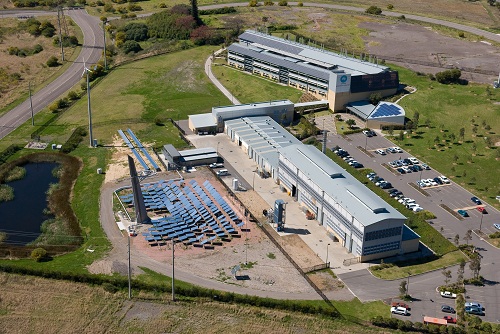 Aerial photograph of the CSIRO Energy Centre in 2006. [Source: CSIRO]

The facility incorporates passive features such as natural ventilation and lighting, shading, special glass, under floor air ducting, and active features such as building-integrated solar photovoltaic panels, wind turbines, battery storage, micro-turbines and an ‘intelligent’ site mini-grid with an advanced energy management system. It also has two solar towers and is the headquarters of the Australian Solar Institute. It is an icon of Australian energy R&D and is becoming increasingly an international centre with short and long terms visitors from around the world. 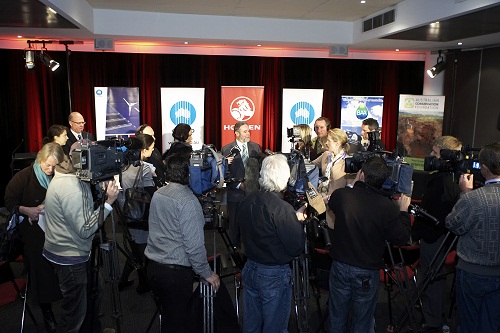 The launch of the Future Fuels Forum in 2008 which brought together community, industry and government representatives to plan for the future of transport fuels in Australia. [Source: CSIRO]

The Program addresses the most significant greenhouse gas emission and fuel security aspects of the stationary energy and transport sectors of the economy. The Flagship involved thirteen CSIRO Divisions, fifteen universities, several international organisations and over 50 Australian and international industry partners. As a result, the Flagship has a major energy profile both in Australia and overseas. It continues to lead the multidisciplinary, multi-Divisional programs in the CSIRO energy domain. 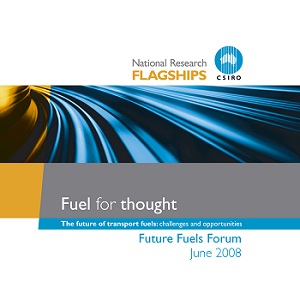 The fulfilment of a vision

The Energy Centre has fulfilled the vision of providing the platform for the expansion of CSIRO’s energy R&D. It has facilitated the development of necessary industry/university/institution collaborative arrangements for maximum impact of CSIRO’s work. It has allowed CSIRO to practise what it preaches in the energy and transport sectors and allowed CSIRO to lead in many of them such as energy modelling, world leading energy storage technologies and systems, the role of alternative transport fuels and reduction of environmental impact across the energy spectrum.

The Centre is also to the fore in public outreach activities, hosting various public functions and meetings on the role of energy in society, particularly the Australia-wide ‘Energy Mark’ community education and consultation process for household energy reduction initiatives. Wright is also the prime author of The CSIRO Home Energy Saving Handbook that was inspired by the energy innovations developed at the Energy Centre. 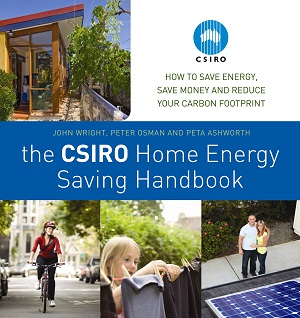 Wright wanted to make a splash in the energy field. The building, facilities and the dedicated young staff now epitomise CSIRO’s innovative approach to modern energy research and development, allowing the researchers to be part of the future and spurring them on to develop energy advances of their own and daring them to achieve their own energy visions.

In 2008 he was awarded a CSIRO Lifetime Achievement Award for raising the profile of CSIRO’s commitment to energy research and development and taking a leading role in the development of Australia’s energy future. Other awards include: a CSIRO Partnership Award – for outstanding industry/community/CSIRO partnership development in the Energy Futures Forum; a CSIRO Medal for Business Excellence – as a member of the Underground Coal Gasification Team for the development of technology leading to the creation of the spin-off company, Carbon Energy and the Schlumberger Gold Medal for teamwork, value creation and invention – for activities associated with a carbon dioxide storage demonstration program.

Other significant achievements of CSIRO Energy Technology are: